I was in my third trimester when I decided to have one of my favorite local soul food spots cater my family’s Thanksgiving meal.

My husband, Donzell Floyd, and I ate at the restaurant, This Is It! BBQ & Seafood, at least twice a month, so I felt like I hit the jackpot when I learned they offered Thanksgiving catering for just less than $130.

My mouth watered just placing the order — Cajun fried turkey, baked macaroni and cheese, cornbread dressing and sweet potato pie with all the fixings. (My mom makes her own collard greens.)

I placed my order on Nov. 11, 2017 and arranged a Thanksgiving day pickup.

Then, I went on about my life per usual, working as a reporter at The Atlanta Journal-Constitution, getting the nursery ready for my growing baby boy and trying to keep up with all the extra meals he required.

When Thanksgiving morning arrived, I was not only relieved, but thrilled I wasn’t cooking.

Donzell was sick. I was less than one month away from my son’s birth. And with no immediate relatives in town except my visiting mother Michelle Breland, we just didn’t have a lot of helping hands to prepare a meal. A Thanksgiving horror: 9 months pregnant and left waiting hours for food | Honeycomb Moms | My mom took a quick photo of her and I the day before Thanksgiving. It was my 29th birthday, Nov. 22, and we were at the doctor’s office having my contractions monitored. | LAUREN FLOYD / INFO@HONEYCOMBMOMS.COM

We barely had enough people to pick up the meal when our noon pickup time arrived, but my mother and I managed.

We gave the restaurant workers about a 30 minute grace period because they tended to run late, and we made it to the location in the 3500 block of Camp Creek Parkway at about 12:30 p.m.

When we walked through the front doors, there was a line snaking toward a cash register opposite us, but that wasn’t our line. A staff member explained to my mom that catering orders were handled in a back room and there was a separate line for that. We waited in it about 30 minutes.

Then, another staff member confirmed our order and handed us a ticket.

I thought that was a good sign, but I thought wrong.

When my mom and I earned a spot in the coveted backroom, we learned it was merely a second waiting area no bigger than an elementary school’s basketball court.

About two staff members manned the area. Chairs lined the perimeter of the room, and seats weren’t immediately available, but the area wasn’t packed.

We could see the disposable pans of food awaiting their owners, and every 20 minutes or so one of the staff members would yell customer names. Their orders were ready.

My mom and I had waited about an hour by the time two chairs opened up. We pounced on them and chatted through the second hour of waiting with no problem.

We were in good spirits. The ladies sitting next to us — out-of-towners catering a meal for their extended family — were hilarious. The few staff members manning the room were pleasant, and they even allowed us to get cups of juice and pop for free.

“Do you want me to get you something to eat,” my mom asked me.

I didn’t want to ruin my appetite on Thanksgiving. Plus, I wanted the food we had already paid for, not to pay more money.

I changed my tune when our two-hour Thanksgiving day wait turned into three.

By that time, my stomach was growling, and my baby was twisting and turning. I worried that he was starting to feel how uncomfortable I was, so I had my mom go get us something to eat. She left the crowded back room to the front of the restaurant. And when she came back about 20 minutes later, she was speaking slowly in the measured way she does when she’s furious but trying not to react.

She explained that she had walked to the front of the to-go line and asked a staff member if she could please get something to eat for her pregnant daughter who had been waiting for her pre-ordered meal for hours. Oliver Twist style.

Fittingly, the woman explained that my mom would have to pay for an additional meal. She did, and I devoured it. A Thanksgiving horror: 9 months pregnant and left waiting hours for food | Honeycomb Moms | My mom had to buy me a meal to wait on the catering we pre-ordered at the This Is It! BBQ & Seafood restaurant Nov. 23, 2017 in the 3500 block of Camp Creek Parkway in metro Atlanta. | Credit: Family

I understood why my mother was upset. As someone who eats out frequently in her hometown of Chicago, she was used to a certain amount of common decency. A restaurant botches an order or has an unusually long wait, and the manager apologizes and offers something complimentary.

But not this restaurant. The manager cowered away out of the public’s view and would not come out even when requested. I only know he or she was even there because a staff member let it slip while complaining about having to deal with frustrated customers.

And frustrated they were.

I heard one man explaining to a worker that he was trying not to go off like an earlier customer but that seems to be the only way he could get his order.

Another family held its tongue through a more than five hours.

I couldn’t believe a restaurant would treat its customers so poorly. I mean the food is good, but no food is that good.

The mood got so tense, one of the workers started calling out how much people who hadn’t picked up their orders had paid for them.

The alleged manager apparently reprimanded her for that because I heard her explaining to a coworker that she was only trying to lighten the mood.

She left in tears before reappearing later.

We asked a different staff member when we could expect our food, and he gave us an estimate, and later, another estimate.

At the four-hour mark, I stopped counting.

I could hear the staff member who earlier left to cry explaining to a peer why the wait was so long.

She said another worker at the restaurant had been giving his friends the VIP treatment, so the kitchen was now having a hard time fulfilling the prearranged orders.

At that point, I wasn’t even angry anymore, but I did consider pitching a story about the incident to the newspaper.

I talked myself off the ledge. In the world of journalism, you want to report the story not be the story. So I kept my mouth shut and waited until we finally got our food.

It was after 5 p.m., my mom said, looking at her photo timestamp. A Thanksgiving horror: 9 months pregnant and left waiting hours for food | Honeycomb Moms | My mom snapped a photo of the food we ordered from the This Is It! BBQ & Seafood in the 3500 block of Camp Creek Parkway in metro Atlanta. | Credit: Family

I vowed then that I would never go back to that restaurant.

I left following up with the manager for a refund to my husband.

I didn’t want to take on anymore stress so close to my due date, and I have a tendency to go all the way down the rabbit hole in these kinds of situations. 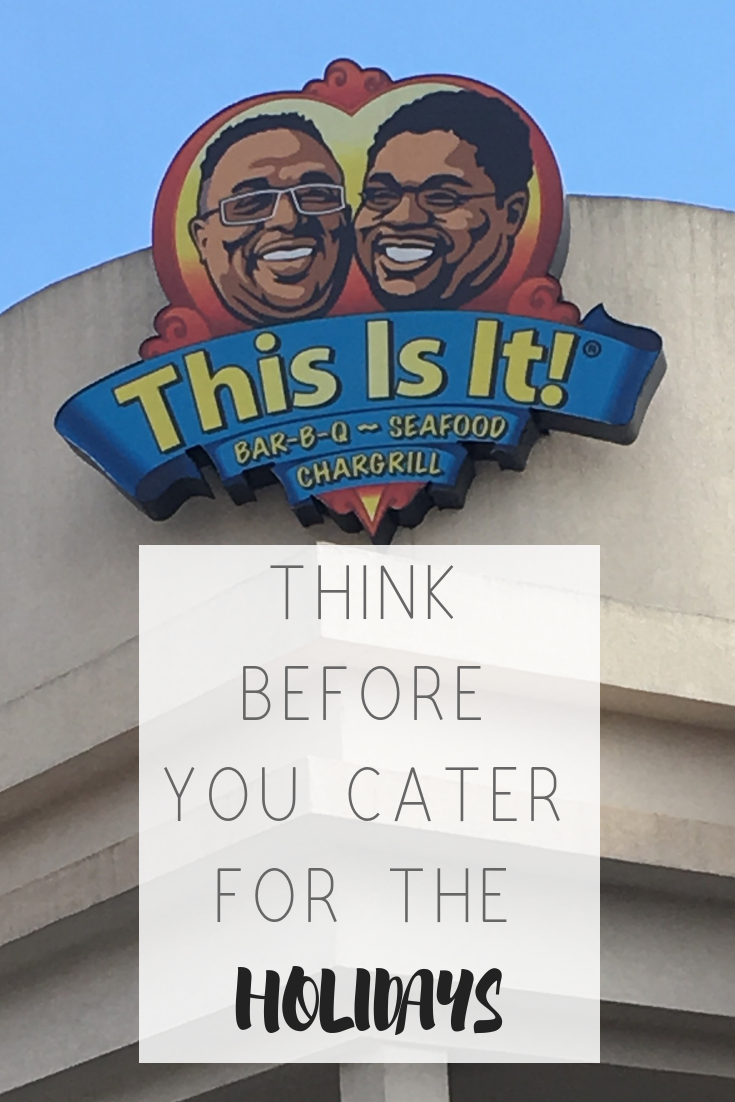 My husband sent the business an email, which was never returned, and on Dec. 18, 2017 our son, Donovan, was born.

First-time parents, we were over the moon. We fell madly in love with Donovan, and it feels like we fall a little harder each day.

Over time, the Thanksgiving situation became nothing more than a funny story we told friends.

The anger faded, but I still haven’t forgotten how I was treated and how it made me feel.

Hunger pangs and frustration aside, what lingers is the feeling that the everyday customers weren’t important enough to be treated fairly. We didn’t matter as much as the restaurant’s need to make money.

I felt helpless. I felt disregarded, and I felt devalued. No one should pay to feel that way. A Thanksgiving horror: 9 months pregnant and left waiting hours for food | Honeycomb Moms | My mom and I ended up waiting more than four hours for our catered dinner at the This Is It! BBQ and Seafood restaurant in the 3500 block of Camp Creek Parkway in metro Atlanta.