If you haven’t seen the viral video of kindergartner Caidyn Bennett explaining how his anti-bullying policy flies in the face of turning the other cheek, wait no longer.

It’s hilarious. I laughed, watched it again and laughed some more, and that is the point. Caidyn was joking, which he does quite well.

He was formerly in the headlines for his hilarious take on making friends.

And even though his recent video is a joke, I won’t lie. Hit me and catch these hands has always been a pretty effective anti-bullying policy in the Chicago Public Schools I attended.

But now that I’m a parent of a black boy who is in the 100th percentile for weight and height, I have my reservations about teaching that ideology to my son.

Kids accidentally bump, headbutt, spit on, hit and kick each other all the time. They play fight and wrestle. If I just leave our fighting conversation at the popular ‘you have a right to defend yourself,’ my baby could end up jeopardizing his record at school over silly, childish scuffles.

I know you’re thinking no one is talking about accidents. Caidyn spelled out a scenario in which another student intentionally punched him. What’s wrong with hitting that child back?

Let’s say someone does intentionally punch my son in the eye and he hits that child back. Because of my son’s unintended strength, the offender falls back and hits his head on a school desk and dies.

We live in Atlanta. It’s hard for me to believe Georgia prosecutors would have any reservations charging my uniquely tall black son with involuntary manslaughter. I believe a jury would convict him. Everyone loses in that scenario, and for what? So my son could have bragging rights about how he showed Johnny not to put his hands on anyone?

And what if the child who hits my son is a little girl?

Do I teach my son it’s OK to hit another child back unless that child is a girl? I’m no feminist, and trust me. That’s a whole other blog post, but I do believe there has to be some equity when teaching children these kinds of moral lessons.

I plan to teach my son:

Don’t put your hands on anyone ever. You can absolutely defend yourself, but hitting someone just because he hit you is not self-defense. That’s retaliation, and we don’t deal in violence. If you do, be prepared to deal with whatever punches, murder convictions or bullets that may be waiting on you.

I plan to teach my hypothetical daughter: Don’t put your hands on anyone ever. You can absolutely defend yourself, but hitting someone just because he hit you is not self-defense. That’s retaliation, and we don’t deal in violence. If you do, be prepared to deal with whatever punches, murder convictions or bullets that may be waiting on you.

I think it’s time black and brown parents got real about what self-defense actually is according to the law.

A lot of us aren’t exactly in denial about the fact that some police officers, judges and regular shmegular people (in my Cardi B voice) assume we are criminals based on the color of our skin. But for some reason, a lot of black and brown parents still think we have the luxury of operating as if that isn’t the case. We think we can simply teach our children all people should be treated fairly and send them off into the world.

Note the words “she reasonably believes.” Those words would have you thinking that even though you hit and accidentally killed Johnny, the law was on your side if Johnny hit you first. That absolutely should be the case, but don’t get it twisted.

If I were prosecuted on involuntary manslaughter charges, it wouldn’t be about what I considered reasonable. My fate would be tied to what the jurors deciding my case thought was reasonable. If I happened to be a 6’6 black man, how many jurors would think a 5’7 white man’s punch qualified as a reasonable threat to me?

Let me answer for you. Not enough to bet my freedom on.

If you’ve ever watched actor and martial artist Jackie Chan in action, you’ll notice a lot of the fight scenes seem so cool not because he’s viciously going after his attackers but because he beats them mostly by dodging their punches and kicks.

He usually doesn’t go straight to violence either, even when he is attacked first. He gives his attacker the opportunity to realize his mistake. He says, “I don’t want trouble.” He tries to problem solve with his words.

He does everything in his power not to fight before he is ultimately forced to defend himself. And even when he does, the only times you see Chan’s characters actively hurting another person is usually when that person has him in a choke-hold.

There are tons of other people around. He has witnesses and a solid legal defense should the situation rise above a regular fight. He has protected himself physically and legally.

That’s a life lesson worth handing out. 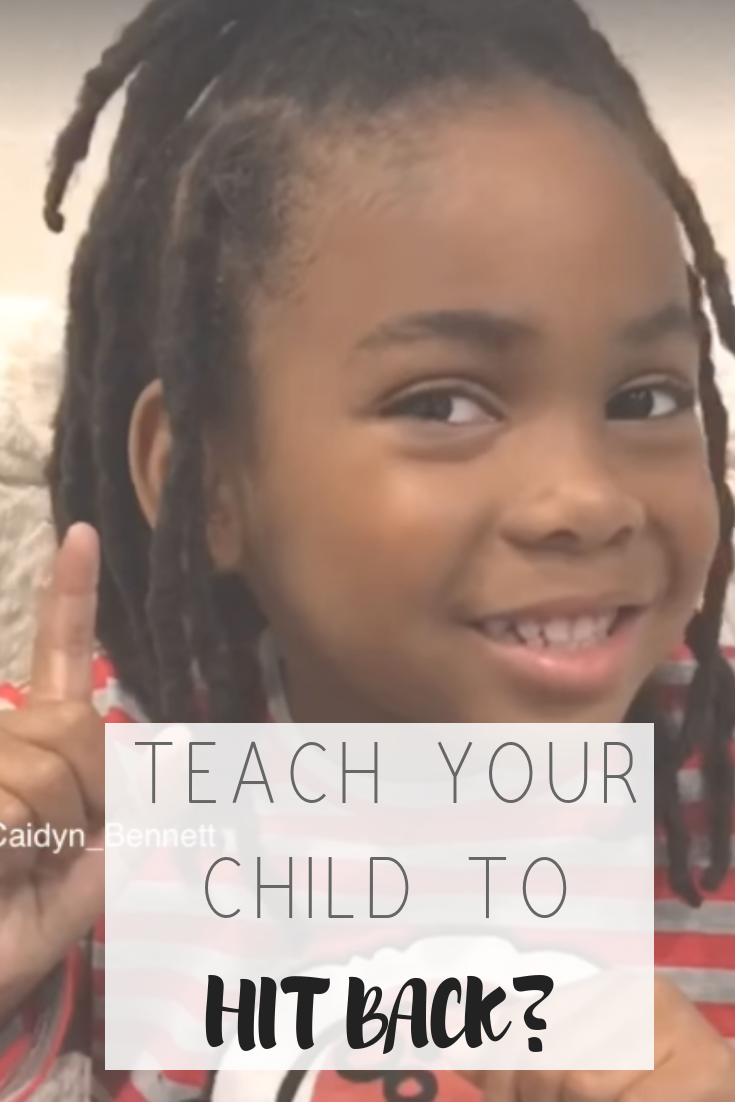 6 Breastfeeding Tips to Increase Your Milk Supply
Why I Canceled Halloween
Should white children wear ‘Black Panther’ costumes for Halloween?
Should I spank my child because I was spanked?

5 thoughts on “Should you teach your child to hit back?”